The Farnsley-Moremen House (built circa 1837) stands as a breathtaking testament to the rich history of agriculture along the Ohio River. Gabriel Farnsley was the first owner/occupant of this red brick Kentucky “I-House” which boasts a two-story Greek Revival portico and an incredible river view. Home to Gabriel Farnsley from 1837 until his death in 1849, the house became home to the Moremen family in 1862. The Moremen family maintained ownership of the house until they sold it to Jefferson County Fiscal Court in 1989. 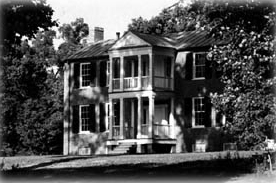 Throughout the 19th century the Farnsley-Moremen House served as the center of a large farming operation with an active riverboat landing. A ferryboat operated from the landing for much of the 1800s transporting people and goods between Kentucky and Indiana. The landing was also a place from which Gabriel Farnsley and, later, the Moremen family could trade goods with passing riverboats. During the Moremen family tenure in the house, the landing became known as “Soap Landing” because the family sold lye soap and other household and farm products from their dock.The house itself represents a transition between Federal and Greek Revival architectural styles. It is composed of a two-story main block with a two-story ell at the rear. The main block features a central passage with two rooms on each end. The house’s imposing entrance includes a transom and side lights. The most impressive feature of the façade is the two-story galleried portico, which includes a carved sunburst on the pedimented gable.

The striking façade of the house must have attracted the attention of the many travelers moving by steamboat on the 19th century superhighway called the Ohio River. While Gabriel Farnsley occupied the house, there is good documentary evidence he took in boarders for additional income .In 1989, Jefferson County purchased the house and the 4.5-acre surrounding tract from Moremen family descendants for purposes of restoration and preservation. The house’s history as the center of a large 19th century farming operation with a riverboat landing made it especially attractive as a focus for understanding and appreciating the role river played in the development of our country. Furthermore, the house became a source of community pride, a center for education, and a retreat that allows people to enjoy an incredible natural setting. 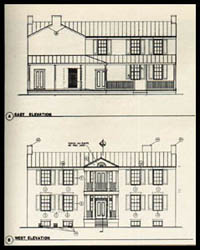 By the 1980s, the once proud farm residence had been reduced to only a fraction of its former self. The portico was nearly gone. Its roof was supported by telephone poles. The trim and shutters had not been painted in years. The landmark that had served as a beacon to river traffic in the previous century was not even visible from the water because of the overgrowth of brush around it.

Several forces contributed to the demise of the historic house. The 1937 Flood was devastating to the Moremen family and the Farnsley-Moremen property. The damage to the house and other buildings, as well as the impact of the depressed economy on the farm, had a lasting effect on the property. Water damage to the house had gone unrepaired. Pine floor boards, buckled and warped by total submersion, remained in the house. Plaster soaked by flood waters was allowed to dry and wallpaper was applied to cover the mud stains.

Fortunately, the Farnsley-Moremen House was known in the local community and was regarded as an important part of its history. By the late 1980s, local residents had identified the house to Family and Neighborhood Services Coordinator Jeanne Montgomery, who worked for then County Judge/Executive Harvey Sloane. Montgomery also lived in the area and promoted the idea of saving the house to County officials. The County finally purchased the 4.5 acre tract the house sat on in August 1988. Now the overwhelming task of returning the building to its former grandeur began.

Together, Jefferson County, under the leadership of then County Judge/Executive David L. Armstrong, Liberty National Bank, and a citizens group called Farnsley-Moremen Historic Home, Inc. signed a tripartite agreement. The formal agreement joined the three in partnership to raise money, oversee the development of the project, and carry out the plans for restoration. Ultimately, these forces raised over $2 million to restore the house, build a Visitors Center, and open the site to the public.

On October 10, 1993, the restored house was opened to the public for the first time. People stood in line for over an hour to tour the house. At one point during the day the line for tours stretched from the front door to the riverbank 200 yards away. Estimated attendance for the grand opening was 15,000 people.

Between the years of 2003 and 2006, Riverside, the Farnsley-Moremen Landing engaged in a major re-interpretation of the interior of the Farnsley-Moremen House. As a result of this project, the first floor of the home is now interpreted to the late 1840s when the first owner of the house Gabriel Farnsley lived there as a bachelor. The second floor depicts life in the home during the late 1880s when three generations of the Moremen family occupied the house. The split interpretation allows Riverside to acknowledge the important histories of both of the families who called this place home over the course of the 19th century–and to talk about the dynamics of change over time.

All of the decisions for the interior interpretation were based on the best historical information available at the time. Paint finishes from the two time periods were re-created based on a comprehensive historic paint analysis of the house by Matthew J. Mosca of Baltimore, MD. Furnishings for the first floor were based on Gabriel Farnsley’s estate inventory and a record of the sale of his household possessions following his death. Antique dishes, glasses and flatware were acquired based on examples found by archaeologists at Riverside. The upstairs interpretation of the late 1880s is built around Moremen family furnishings donated to Riverside. The project allowed Riverside to develop a more historically accurate picture of life in the Farnsley-Moremen House during the 1800s. 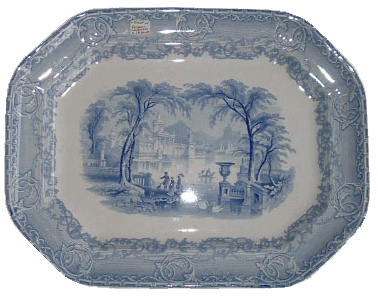 This blue transferware platter from the 1840s matches fragments found during archaeological digs at Riverside. 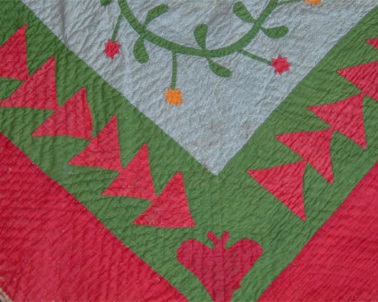 A Moremen family quilt from the 1880s was reproduced by Amish quilters for display in the upstairs of the Farnsley-Moremen House.