The archaeology crew that works at Riverside is made up of professional archaeologists and students. The professionals work for the Kentucky Archaeological Survey, which is jointly administered by the Kentucky Heritage Council and the University of Kentucky. 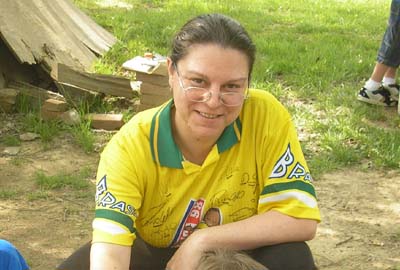 Diane has an MA in Art History from the University of Louisville. She participated in the U of L archaeology field school in 2007 at Farmington. This is her first year working with the Building Blocks of History Program. 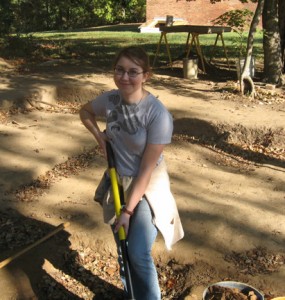 I’m from Milltown IN. I’m graduating with my BA in December, with majors in Spanish and Anthropology, and minors in Religious Studies and Russian Studies. I did field school at Farmington in 2007. 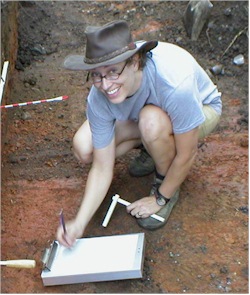 Lori is a staff archaeologist at the Kentucky Archaeological Survey and is assistant director of the Riverside Archaeology Program. She is a native of Virginia, but has lived in Louisville most of her life and graduated from Assumption High School. She has a B.A. in Photojournalism from Western Kentucky University, a Law Degree from the University of Louisville, an M.A. in Anthropology from Northern Arizona University, and is a PhD candidate in Anthropology at Syracuse University. She has been a part-time lecturer at the University of Louisville. Lori specializes in historical archaeology and is particularly interested in the archaeology of plantations and slavery. She has worked at many archaeological sites in the area and she is the archaeologist for Farmington historic home. She is also interested in historic preservation issues and serves on the Louisville Historical League board of directors and assists Metro Louisville. Previously she worked at the Jefferson County Office of Historic Preservation and Archives. Lori, who has always had a strong interest in historic preservation, became enamored with archaeology after she volunteered to wash artifacts during a Kentucky Archaeological Survey project! 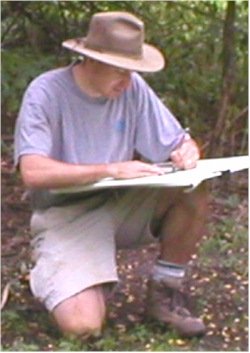 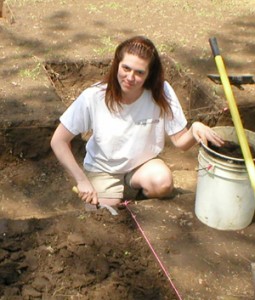 Rebekah is a native of Louisville, who graduated from Jeffersontown High School. She first became interested in archaeology at a young age. She enjoys exploring the past cultures of the world and how people lived in an everyday environment. She decided to pursue her interest and make it a career. She earned a B.A. in Anthropology from the University of Louisville and plans to seek an M.A. degree in the future. She is a full-time archaeologist and laboratory supervisor in Louisville for the Kentucky Archaeological Survey. Rebekah has been working at Riverside since 2002. She has also worked at archaeological sites throughout Louisville, Kentucky, and Indiana, such as Farmington, Portland Wharf, Squire Earick House, Farnsley-Kaufman House, Indiana Army Ammunition Plant, and others.