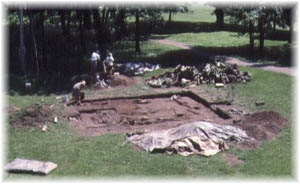 In 1995, archaeologists began work to find the original detached kitchen thought to have been located behind the main house. They discovered remnants of this structure like the hearth, support posts, pit cellar and walkway. Nearly 30,000 artifacts were recovered during the excavations, which enabled archaeologists to interpret the architecture of the kitchen building and reconstruct the lives of those who had worked and lived there. Artifacts such as nails and window glass were used to determine how the building was constructed and to find the location of the windows. Fragments of dishes, bottle glass and animal bone provided information about the diet and stylistic tastes of the Farnsley and Moremen families. 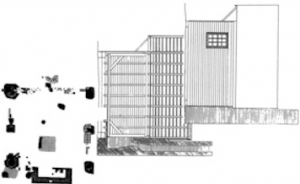 The large amount of personal artifacts, like toys, smoking pipes, sewing implements, and even coins led us to believe that people also lived in the kitchen. These people were most likely some of the slaves who worked and lived at Riverside. A spoon handle scratched with an “X” may have been the possession of a slave, as similar artifacts have been recovered by archaeologists at many other slave sites in Kentucky and throughout the South. The information recovered during the archaeological excavation of the detached kitchen has allowed Riverside to create one of the most accurate 19th century building reconstructions in Kentucky.

The outbuilding yard area is located between the Main House, the Slave/Tenant House Area and the Ice House site. The yard area was basically the space between the outbuildings that was often used as work space. Many activities took place in the yards located in between buildings on plantations, such as washing, soap making, preparing meat, making jams, and many other domestic chores.

According Moremen family tradition, a building was located in this area. It is believed that a smoke house once stood in the area. Archaeologists have just started investigations in this area. They intend to find out more about the kinds of activities that took place in the Outbuilding Yard Area and if any buildings did exist there at one time. More will be learned about this area as research progresses. 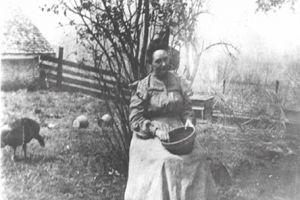 Photo of Nannie Storts Moremen working in the Outbuilding Yard Area near the Icehouse ca. 1900. 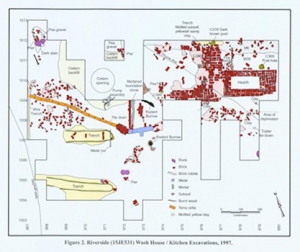 As reconstruction of the detached kitchen loomed in the background, excavation of the washhouse began in 1998 and was completed in 2000. The task of locating this building was easier than the kitchen, since a photograph showed it near the location of the kitchen and smokehouse. The remains of the washhouse, such as pier supports for the building, water cistern, hearth, and drainage system were discovered. The thousands of artifacts recovered from the washhouse indicated that it was probably constructed sometime after the destruction of the detached kitchen in the mid 1870s. The building was probably used into the early 1900s and then was dismantled. While oral history has always referred to the building in the historic photograph as the “washhouse”, the archaeological excavations conducted at the site reveal that washing activities were not exclusive to it. More than likely it was a multipurpose building that housed a water cistern, was used for washing activities, and served as an indoor domestic workspace. Archaeological evidence indicates that a large portion of the washing activities at Riverside during the late nineteenth century were not confined solely to the building and extended to the yard spaces around it. An outdoor hearth suggests that a large part of the washing duties, such as heating water, took place outside of the building.

The excavations at the washhouse also may have found evidence of soap making at Riverside. There is a strong history of soap making at Riverside. The Moremen family was known to make large amounts of soap to trade with passing riverboats, which inspired Riverside’s nickname of “Soap Landing”. A 1890s family cookbook featured two recipes for making soap. In a memoir, Horace Moremen describes his mother Rachel’s soap making operation at Glen Fount, the Moremen’s first home in Brandenburg.

“We had what was called an ash hopper in a little house to itself and all the ashes from all the fires were brought and put in that ash hopper. It was wide at the top and came to a point a the bottom and under it was trough to catch the lye and carry it to a barrel and at the proper time for making soap, water was poured on the ashes and the lye was boiled in the kettle till it was strong enough to make soap and my mother always had barrels of soap, both hard and soft.”

It is probable that the hearth behind the washhouse and two linear fire pits found during the excavations appear to have been used to make wood ash or heating kettles to make the soap. The soap making and other domestic duties carried out in the washhouse and the nearby yards would have been conducted by the Moremen women and some hired servants. 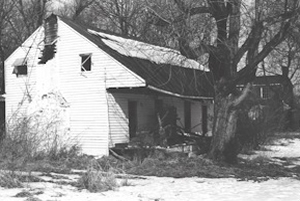 With the completion of the excavations at the washhouse in 2000, archaeological research at Riverside was focused on another important outbuilding, the slave house. Prior to the Civil War, 14 to 23 enslaved African Americans lived and worked at Riverside. The research of the building where many of them were housed is an important tool for interpreting a very important aspect of history at Riverside. Much is known about the building through photographs and oral history. In fact, it was still standing as late as the late 1980s. However, its original use as a slave house has been largely forgotten as the building was used for other purposes like a tenant house after the Civil War. Although we know much about the slave house, archaeology still has much to contribute to the understanding of the architecture and the lives of all the people who had lived there. During the excavations, numerous remnants of the building have been uncovered, such as two hearths, stone piers that supported the building, and remnants of the porch. Participants in the Building Blocks of History Education Program recovered thousands of artifacts at the slave house excavation. Most of these were associated with the building’s later use as a tenant house. Based on the artifacts, archaeologists believe that the building was constructed by the Moremen family around 1860 and used as a slave house until 1865 when slavery ended in Kentucky. The building likely housed paid servants and laborers, some of whom may have been ex slaves on the property during the late nineteenth century. For much of the twentieth century, various members of the Moremen family lived in the building. The excavations at the slave house were completed in 2002. However, analysis of the artifacts continues and it will provide valuable information that will be used to interpret the building’s construction and all of its uses. 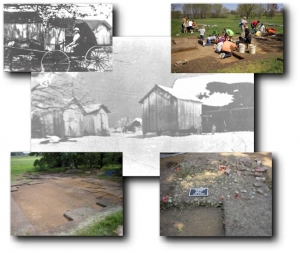 Archaeological investigations at the site of a large barn began in 2002 and were completed in 2004. Several historic photographs show that the barn was a large two-story wood frame structure.

A concrete block dairy was added to the south wall of the barn in the 1930s. Archaeologists have learned that the Moremen family likely constructed the barn around 1860 when they moved to Riverside. Pier supports and postholes were found during archaeological excavations suggesting that stone and brick piers supported the barn, which contained various stalls built with posts in the ground. Thousands of glass fragments found at the site indicate that the barn also had many windows, particularly along the north wall. The barn was demolished sometime after the 1950s. The concrete block dairy was demolished in 1996. The archaeological information collected during the excavations wil help interpret and reconstruct the barn. 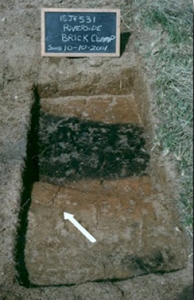 The brick kiln was a temporary structure built to fire bricks made on the property. Gabriel Farnsley’s slaves likely built the kiln and made the bricks, which were used in the construction of the main house.

The kiln site was identified during limited archaeological excavations conducted in 2001. A large amount of brick fragments and a large burned area were found during the excavations.

Additional excavations to fully uncover the kiln site are planned.

Prehistoric Native American hunters and gatherers lived in the Ohio Valley as early as 10,000 B.C. Some of these people may have camped or hunted near the land that would become Riverside. However, the most intense prehistoric use of the property began around 6000 B.C., as groups of hunters and gatherers established base camps. They took advantage of the abundant resources of the river valley, such as mussels, fish, plants and the large animals. Around 1000 to 500 B.C., prehistoric Native American groups in the area established longer-term camps and began to practice minor agriculture at Riverside. This period saw the introduction of pottery, the bow and arrow and a larger emphasis on ritual activities.

Archaeologists working at and near Riverside have found evidence of these prehistoric Native American camps. Stone tools, pottery, fire pits, storage pits, post holes from houses, and food remains have been found at Riverside. Archaeologists have also identified a prehistoric cemetery on the property, which shows that people continually lived and died at this location for thousands of years. This cemetery represents an important part of Riverside’s history and is protected.

By 900 A.D. prehistoric Native American groups formed large villages and practiced large-scale agriculture and trade in the Ohio Valley. Although the land at Riverside was not used as a village site during this period, native peoples visited or passed through while traveling the river. Just prior to European settlement of the area, the large villages and towns disbanded and eventually the historically known tribes were formed. None of these tribes lived in the area of Riverside, but the land was an important hunting ground for many of them. Native American groups continued to use the land that their ancestors had occupied for thousands of years until driven out by European settlers in the late 1700s.